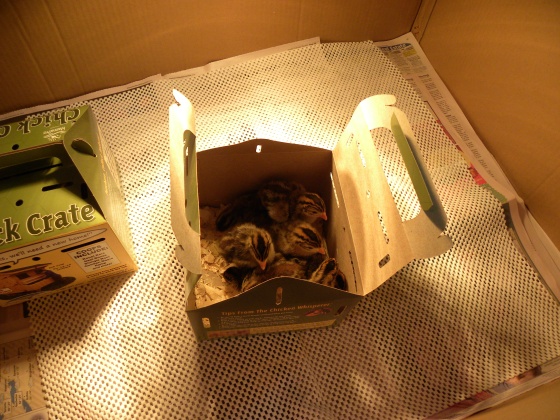 The keets on their first day here.

Okay I have a confession…I hate our guinea fowl. I am not alone in this, most of us dislike them, some of us with a passion, and in truth, I’m fairly certain that Kevin hates them the most of all! After all, he is the one who has to clean up the mess when a bird decides to escape its nighttime enclosure right into the path of,  what I am sure is, a fox, waiting for its midnight snack to just walk right by. That must be the laziest and fattest fox in three counties or maybe just the smartest?

Sure, they look fuzzy and cute now.

We had originally purchased these infuriating, avian bastards in the hopes that they would keep the bug and snake population, around the house, to a minimum. Our original batch of 16 keets (what they call baby guinea fowl) were the first farm animals to arrive, along with the ducks, and our first foray into keeping any kind of poultry or game birds. So, looking back now, I would say that we had become overly attached. I had heard stories about guineas taking up residence on people’s decks, porches and roofs, leaving a trail of poop behind. It didn’t deter me. I definitely dislike being chewed on by ticks and surprised by snakes more than having to deal with poop. Seriously, ever since becoming a mother of two and dog owner of one, most of my day is spent in the never-ending cycle of having to clean up someone’s poop anyway, why not add a few more butts to the rotation?

Yep, cute and not too messy…yet.

We cared and fed these little ones until they had clearly outgrown the indoor brooder, all the while, training them to come when called. We would call them, every night a dusk (the time we wanted them to come in to their enclosure once we turned them out to free range) and as we called we would feed them white millet, which, after watching them consume the first few times, I renamed “guinea crack.” Every night was a feeding frenzy! They would bite us and crawl all over each other in their need to get their fix. You can imagine how proud we felt that we were obviously going to have the best behaved guinea fowl in the neighborhood. Sure, all the old timers told us we were crazy and that the second they had the chance they would either, up and leave or just take residence on our roof and never do their intended job. Convinced that we had started training them early enough, we moved them out to an old chicken coop and kept them inside for a couple of weeks, so that they would know it was the home that they should come back to everynight. 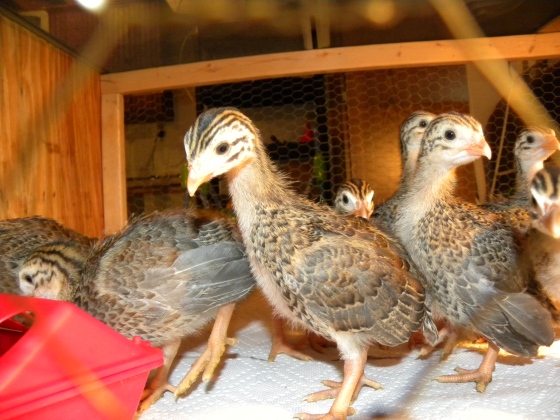 Still cute, and still addicted to their “guinea crack.”

One afternoon, after running errands, we came home to loose guinea fowl running about the barnyard. How they got out, we will never know because upon me questioning everyone who had been near the house that day, each insist that they were either, sure to check that the door was latched and locked, or that they had been nowhere near them. Ah, but no need to panic because we had our trusty white millet to lure them back in with. I was convinced that this would just be an early test, one that would, undoubtably, prove our success in training what everyone else had deemed, an untrainable bird. Yeah, it quickly became evident that we were suffering from the disease that often afflicts those who are naive and unusually optimistic, delusionsofgranderitis! They could have cared less about us shaking that damn millet and excitedly yelling, “here birdie-birdie.” Having quickly gotten our fill of looking like, what I am sure closely resembled, acid-tripping fools who were happily talking to nonexistent birds (because, of course, they were hiding in tall weeds which made them invisible to anyone except those of us standing right next to them) and wishing to not have the neighbors, or for that matter, any inhabitants of the cars passing by the barn driveway, to think we had lost what little marbles we had left, we gave up. Kevin resorted to catching what he could, using his ever graceful technique of, “let me run full tilt at this skittish bird and at just the right moment leap through the air grabbing it without falling on it and breaking its or my neck,” while I maned the door, and placed them back in their house. We recaptured all but five, three of which took up residence in a line of pine trees, located in a near by pasture. We figured they would be smart enough to roost up in the trees at night, we were wrong! The next morning there were no guineas in the yard, only the tell-tale signs of a scuffle, one that the guineas had obviously lost.

Once we take the crazy farm kid out, what’s not to love about this bird mansion?

Having seen the fate of those we had not captured, we were understandably reluctant to release the ones who remained. Plan B became moving them in to a large and movable outdoor dog run that would protect them but also allow us to move them about. Sounds great right? Well, it is most decidedly not! They have continued to find ways to escape. Each morning begins with the question, “what’s the guinea count?” and more often than not, it is one less than the previous day. They had even started to lay eggs (baby keets you say? Maybe we could replenish the flock?) Well, being the dumbest birds we have come across, they laid them in a nest, at the very corner of the run, where something proceeded to dig and take one egg out per day. Being the kind flock-keeper that he is, Kevin moved them all into the center and those fools moved them all back to the corner. They have all disappeared now and only 5 birds, as of this mornings count, remain. 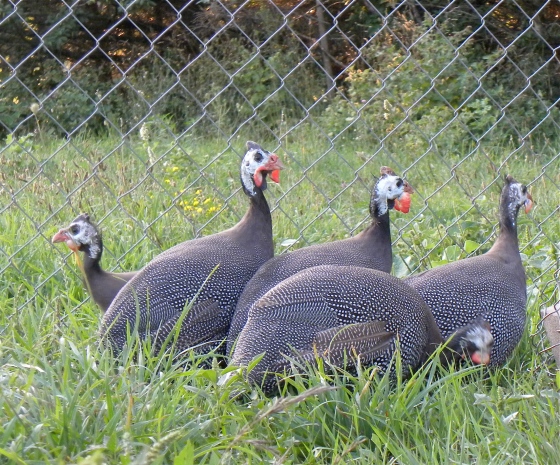 The remaining five…not quite as cute now, for numerous reasons.

I think it’s official, our first farm failure is confirmed! I think the hardest thing is our conflicting feelings. Both of us simultaneously feel, angry at their lack of senses to stay in the safe place we provided for them and their lack of survival skills to…well survive and guilty that we were unable to keep them safe. That will teach us to disregard the advice of old timers, won’t it? I have to say, and Kevin agrees, we feel better after confessing this sin. Maybe this should become a weekly post? Yes, I think that will be both cleansing for us and entertaining for you. Check back next week for: Confession Fridays-atonement of farmer girl and farmer boy.

Does anyone else have anything they would like to get of their chest this week, no judgment guaranteed! And please, do the same for us and be kind.

wanna catch up on what has been happening here on the homestead?

just a bit of business