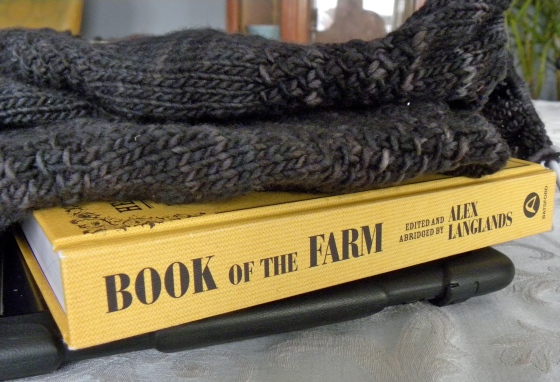 I have been wondering how to include my knitting projects here for a while now. I am not a master knitter, we are not processing our own fleece yet and this is decidedly not a knitting and crafting blog. However, crafting, in all it manifestations, is a part of all of our lives, usually on a daily basis, which is why I would like to share a project here and there. I do not create patterns from scratch in my spare time (maybe I would if I had spare time?) with the exception of some Elizabeth Zimmerman sweaters. If you are unfamiliar with knitting, they are made using a predetermined calculation for sizing the sweater with different neck options. You take measurements of the person the sweater is for, figure out gauge and input your numbers into Elizabeth’s equation and, like magic, you have all your pertinent stitch counts. 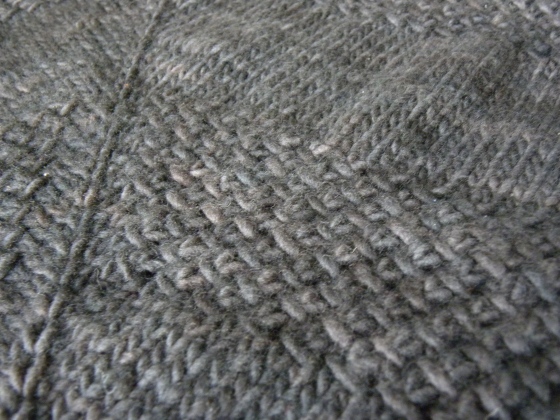 Anyway, I am a fairly new reader to Ginny’s blog, Small Things, but her Wednesday Yarn Along seems like the perfect way to post updates on my knitting projects, also infusing each week with incentive to make progress when motivation begins to wane. All while affording me a way to not only include what I am reading at the moment, but to get some great inspiration and ideas, both of the knitting and book sort, and, at the same time, sharing it here with you. 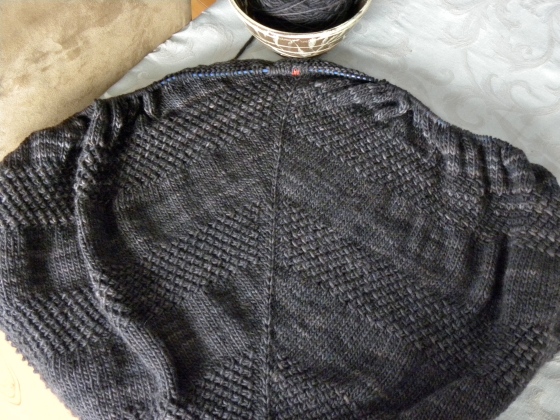 This is my version of a Textured Shawl Recipe, not a proper pattern, per say, but more of a guide in using different stitches while using your preferred method of knitting up a triangle shawl. My notes (what little of them there are) can be found here on my Ravelry page. I had bought some Malabrigo Worsted at my LYS, it’s not my favorite yarn to work with but it is soft and this particular colorway is quite pretty. Depending on the light it can appear anywhere from purple, to gray and even sometimes black. I had actually put this on the needles before the holidays but with the christmas knitting and crafting surge, which always takes hold in December, I set it aside until after the new year. 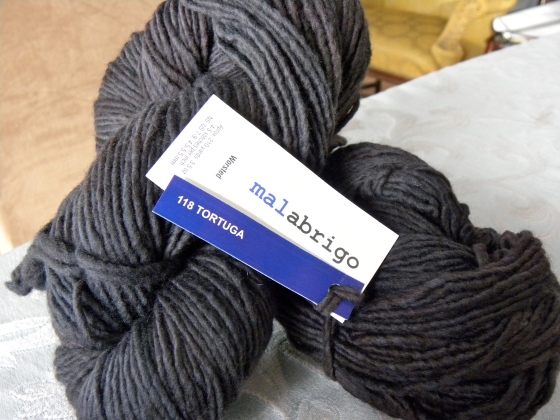 If you asked Kevin about my knitting he would tell you that I am most definitely a frustrated pattern writer at heart because every time I choose a pattern to knit I inevitably have to tweak it. I tell him that is what all knitters do, hoping to attain a custom fit or to use a preferred method, but I have yet to convince him and his stock response is “If you aren’t going to follow the directions why don’t you just make a pattern for yourself.” (I am quite sure that I lack both in knowledge and creativity to make my own patterns so, for now, I will stick with using those written by others.) As usual this project was no different and with suggestions from Ravelry users I made a few changes, the biggest being that I decided to reverse the called for textured pattern on the left side of the shawl so that everything appeared to radiate from the center line knowing that once completed it would drive me nuts if it did not . I am happy with the result achieved, thanks to that minor tweak, but I think it caused the knitting to become tedious and slow (maybe that’s why the pattern writer chose not to reverse it herself?) I can’t deny that I’m looking forward to casting off soon and moving on to something else. 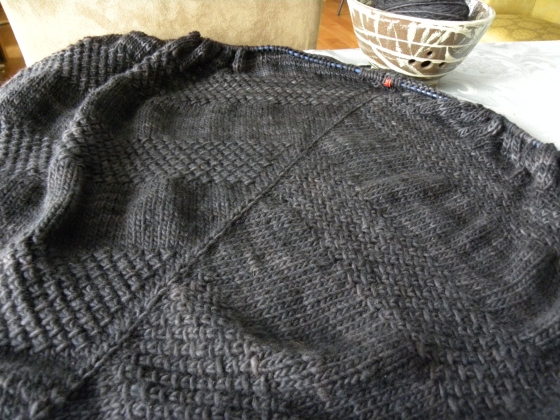 As for the books, I am reading Shannon Hayes’ Radical Homemakers, which I thought I had not read, then when I looked at the Kindle app on the IPad, realized that I had bought it over a year ago and had already gotten through over half of it. Since I have been feeling frustrated as of late, and in need of a little encouragement in this lifestyle we have chosen, I decided to reread and actually finish it this time. I also have been “stealing” Kevin’s abridged version of Henry Stephens’s Book of the Farm, a gift that I had given him for Solstice and that he obviously does not guard well. It is a book from 19th century Britain, a sort of “how to” of living life on a farm, which is broken up and organized according to the four seasons. It is loaded with ideas on how to work and live on the farm using old and often quite creative methods. I love it!

What have you been Knitting (or just crafting in general) and reading these days?

10 thoughts on “joining a yarn along”

wanna catch up on what has been happening here on the homestead? 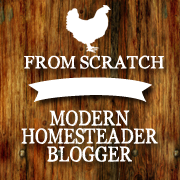 just a bit of business